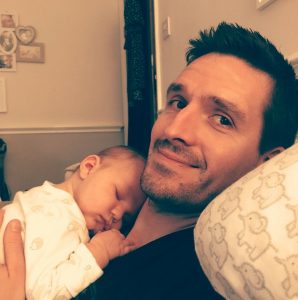 When I was around 1 ½ years old I suffered a blunt trauma accident while in the garden at home where I was knocked unconscious by my slightly older brother after he hoisted up the handle on Victorian cast iron roller and let it fall on my head. This accident is always highlighted by anyone I see at ENT as probable cause my balance issues.

In my early years I used to suffer what my mother would call dizzy headaches. These were rapid on-set bouts of severe vertigo where the world would suddenly appear to flip and start spinning. These always caused me to vomit and eventually once I was exhausted I would fall asleep and when I woke things would be back to normal. I remember having a few of these and dehydration was nearly always blamed.

These symptoms went away and didn’t return until my late teens when I had a few more isolated dizzy spells. All this time I had been diagnosed as partially deaf but had declined hearing aids. In my mid 20’s I started having the dizziness attacks again and they became more frequent when I worked in a stressful sales environment, sat under strip lights, looking at a computer all day. This time I was referred to ENT and sent for MRI’s, CT’s and vestibular testing (The rotational chair etc) at Withington in Manchester. They could never induce my dizziness and from my anecdotal evidence they diagnosed me as having MAV (Migraine Associated Vertigo). I was given Prochloroperazine (apologies for the spelling of that!) to try and alleviate the nausea, in my experience these did very little for me.

I quit my desk job and tried to find something else to do. I ended up going on a building site and after a while took some training to become a tiler, doing kitchens, bathrooms etc for domestic and commercial clients. The symptoms again disappeared for a number of years probably 10 or so and only came back a few years ago in my mid thirties. In my early 30’s my hearing started to become a bigger problem, I could tell it had deteriorated and I was now suffering with Tinnitus. When I finally got tested they said I was considered severely deaf in my right ear and hearing in my left was also substantially down on what it should have been. The lad who tested me kept coming in to check the headgear was working, he couldn’t believe how bad my hearing was considering how well I had managed in a conversation with him beforehand. I must have learned to lip read to compensate. I was fitted with a hearing aid in each ear and this greatly reduced my tinnitus as well.

Previously nobody had linked my hearing loss and vertigo, I was told they had ruled out Meniere’s when I saw the specialists in my 20’s as I didn’t suffer the tinnitus and hearing loss during bouts of vertigo.

In spring this year I started suffering again.It’s been a bit of a battle to get referred to ENT this time roundeven after my symptoms returned and worsened substantially. I was struggling with vertigo on a much more regular basis and had a general feeling of unbalance. I was getting what felt like recurrent ear infections in my ear, being given antibiotics or drops each time. At one point I had a feeling like my ear was blocked and I had lost probably 70% of my hearing in my stronger ear. After another visit to the gp’s where I was asking to be referred to ENT I was given BetahistineDihydrochloride on a short term prescription and was told that should help with the giddiness.

I took that for a week and it did seem to make the actual vertigo attacks less severe, but I still had the constant giddiness, variable tinnitus, what I can only describe as brain fog, a new found sensitivity to high pitch noise and a strange feeling that even when you can hear people, sometimes you can’t actually decipher their speech. I was pretty low at this point and was feeling like the Betahistine might be making me depressed (I stopped taking it), with hindsight it was likely just the situation depressing me and the fact I didn’t seem to be getting anywhere with knowing what was happening. I’d googled all my symptoms and it was seeming to be a fit with menieres, but the more I read the less I wanted it to be that.

My wife and I then went away on holiday with friends and I got talking with my mates wife, she is American and is a masters qualified Pharmacist who works for the Federal Drug Administration, she was very interested in symptoms and asked me all about it. She then told me her sister who lived Australia was a specialist in vestibular disorder and straight away got on the phone to her. She had me email her the history I have detailed above. She was convinced I was a perfect fit for menieres, she advised me to start taking the betahistine again (saying any side effects are usually short term and decrease once your body get used to it) and to switch to a slow salt diet. She said to get myself an appointment with ENT where they can track me hearing loss and start to build a picture of where I am with it all.

That is basically where I am up to now, I went back the GP and again asked to be referred to ENT. I told the Doctor I suspected I had menieres, he was response, as if I’d just been googling illnesses and choosing what to have was, “well you don’t want that, there is no cure.” After a long discussion he agreed to refer me, this was in Mid April, I will now be seen by ENT in Mid July. The symptoms seem to have eased for now, no full on spells of vertigo forover a month with is positive but everyday is different, there seems to be little rhyme or reason as to when I feel alright and when I feel dreadful.