We are a patient led global charity registered in the UK dedicated to helping you find your ROOT CAUSE and find TREATMENTS THAT WORK.

JOIN WITH US TODAY AND RECEIVE 3 FREE GUIDES:

– A GUIDE ON HOW TO HELP YOU FIND YOUR OWN ROOT CAUSE, SHOWING 17 POTENTIAL ROOT CAUSES TO INVESTIGATE

The Root Cause guide has been built up from patient feedback supplied by our members.

ALSO BY JOINING HERE TODAY YOU WILL REGISTER TO RECEIVE REGULAR UPDATES ON OUR CURRENT RESEARCH AND TREATMENT REVIEWS.

You are now walking into the controversial world of SERC.
In the US it is regarded as a Placebo and not an allowable treatment.
However in the UK it is the standard defacto first treatment prescribed by most ENT Consultants that I’m aware of.
However it remains controversial in many ways, but I find that is not unusual in the Meniere’s world. Meniere’s is a set of symptoms with a multifaceted set of causes. So anything that works for one person may not work for another.
But that does not mean you have to decree everything as “it does not work” because it has not worked for everyone in the Meniere’s community.
I was on Serc for 18 months when first diagnosed and I don’t care what anyone says, it absolutely stopped my constant vertigo attacks for around 18 months. But after that time the vertigo attacks started coming back albeit much less frequent and I then chose to go down another treatment route.
This seems to be standard for people on Serc, there are lots of studies on this. It does work for a while then it’s effects can start to reduce. Your next step can then be to keep increasing the dosage. Personally I chose a different route to this.
But I know of many people in the UK who are being treated successfully on SERC

SERC in the US

SERC isn’t generally available in the US as the FDA has not approved it for Menieres treatment however our members if they want it tend to obtain it from a compound chemist though you would still need to ask your doctor for a prescription. Others in the US get it also by ordering directly from Canada. 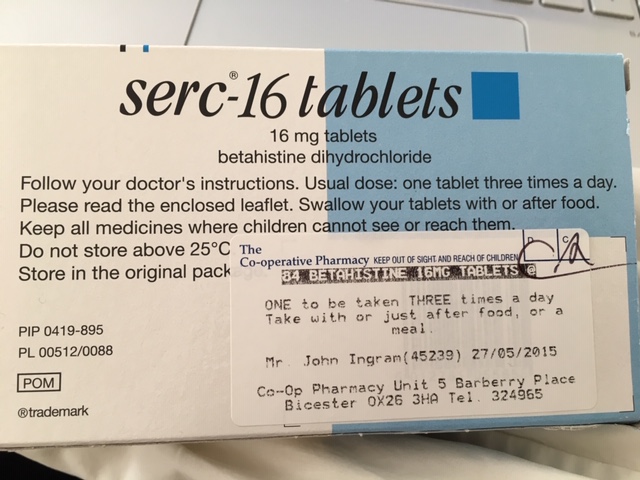 The other controversies are around dosage and type of tablet.
I’m absolutely certain in talking to so many Meniere’s sufferers that the minimum dosage you need to start on with SERC is 16 mg x 3 per day. But many ENT Consultants continue to start people on less that that e.g 8 mg x 3 or 16 mg by 2 or stop taking them until you have an attack etc.
In my opinion you need to get your consultant to agree to start you on 16 mg x 3 per day and take them every day, otherwise you are not taking enough to have any effect on your Meniere’s symptoms.

Studies have also shown that if 16mg x 3 per day is not successful then high dosage Betahistine is becoming increasingly used by ENT Consultants.

For example this study which has successfully trialed people on up to 480 mg of betahistine per day and found they have done well on it. Click here to read the study.

You would need to get your medical practitioner to agree to prescribing this dosage and may need to look up the studies on high dosage Betahistine to convince them.

SERC is the original product which contains betahistine dihydrochloride. There are also generic versions of this now available which are cheaper for the Pharmacist than the original ones. The only difference being the binding products used in the manufacture. Some people may have a reaction to the different types of binding products the manufacturer has used but fundamentally they all contain the same drug which will work on your Meniere’s.
I’ve attached photo’s of my last prescription of SERC which I have not used but unfortunately are out of date now. They are generic ones manufactured by Abbott Healthcare.

HOW DOES SERC WORK

Adding to the controversy, there is much debate over how SERC works if it works at all.

Here is a definition :

“Betahistine has two mechanisms of action. Primarily, it is a weak agonist on the H1 receptors located on blood vessels in the inner ear. This gives rise to local vasodilation and increased permeability, which helps to reverse the underlying problem of endolymphatic hydrops.”

“More importantly, betahistine has a powerful antagonistic effects at H3 receptors, thereby increasing the levels of neurotransmitters histamine, acetylcholine, norepinephrine, serotonin, and GABA released from the nerve endings. The increased amounts of histamine released from histaminergic nerve endings can stimulate receptors. This stimulation explains the potent vasodilatory effects of betahistine in the inner ear, that are well documented.”

In the controversial world of Meniere’s where many solutions are dismissed as “don’t work” because they don’t work for everyone. There are many people who SERC does appear to work for and it did work for me for 18 months.

The minimum dosage to be successful is 16 mg taken 3 times per day. If vertigo continues ENT Consultants are increasingly finding success by significantly increasing the dosage to many times that.

For example this study which has successfully trialed people on up to 480 mg of betahistine per day and found they have done well on it. Click here to read the study.

So it is definitely worth giving it a try on standard dosage and if that does not work then try a higher dosage.